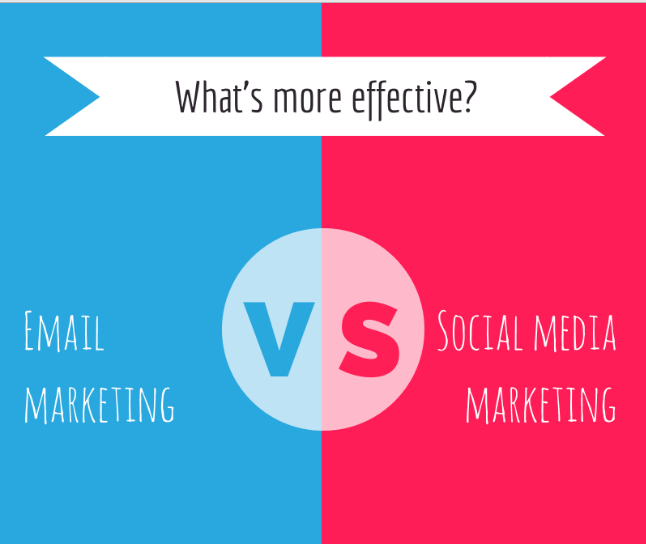 Now that we are doing good on social media, can’t we stop putting efforts on email marketing? This question has been asked several times, either on the internet or in some of our meetings. As a digital agency, it was somehow perceived as an insult, not to the team, nor the agency, but to online marketing in general. Each time a “new” effective platform pops-up, we need to cancel the previous one. Well that’s definitely not the way things work.

We simply answer this question with: “social media can NOT replace emails”. Here are the reasons why it doesn’t replace email marketing:

Either in B2C or B2B, communicating about an offer, a promotion or an update through Facebook, Twitter or any other social network makes the communication impersonal. When a Facebook page or a Twitter account publishes a post, it would be addressed to the general public. While in an email/newsletter, businesses can approach each individual in the contact list with the first and last name. Doing so drives more attention to the content of the email which can also result in better outcome. According to Aberdeen, “personalized emails improves CTR by 14% and conversions by 10%”.

Email messages have better chance to be seen than social media

Without a doubt, Facebook is the largest social network ever, and the second most populated website after Google. However, running a Facebook ad for a specific target doesn’t necessarily assure that all users, within this target, will see the ad. Yes, it’s true, this also applies to emails. But according to Radicati, an email message has 5x higher chance to be seen than a Facebook post.

Emails are DEFINITELY not dead

The statement that email subscribers don’t read their emails anymore is a total myth. To prove this, we had to refer to ChoozOn which stated that 57% of email subscribers allocate 10-60 minutes per week browsing marketing emails. A lot of you will say that Facebook, Twitter or Instagram users spend more time checking their feeds. While this statement is true, Facebook users “like” several businesses pages, and with the latest big Facebook update, they are now seeing less and less content coming organically from these business pages. And rarely will Facebook or Twitter users check a business account randomly, without any specific reason. In addition, 72% of people said they prefer to get promotional content through email, versus 17% via social media, according to MarketingSherpa.

Whether on Facebook, Twitter, and recently Instagram, businesses have to run ads to promote their offers, promotions, or simply their announcement. To do that, they have to target people according to their interests, jobs, demographics… etc. Not all users who see the ad, will feel concerned or interested by it. Therefore, their newsfeed might get full of similar irrelevant ads. The only way to get rid of them is to… God forbids… quit the social networks! On the other hand, if users receive irrelevant emails, they can simply unsubscribe from the list, in a click of a button. And poof… no more emails from this sender.

In conclusion, email marketing is a big player in any online marketing strategy. But now that we have, hopefully, convinced you that social networks cannot replace emails, we hope that you won’t look down on social media marketing. Many social media agencies will agree with us when we say that every online channel has its own benefits. Therefore, collaborate with a digital agency to create a successful online marketing strategy and give every channel its right.

Email Marketing Expert | Email Automation Architect If you are not capturing emails and following up with your prospects you are LITERALLY leaving money on the table. I work with many clients from all around the world; constantly testing different email marketing softwares, strategies, automation tools, subject lines and everything email-related. Feel free to send me your questions, I will answer them here.

What is Cost Per Action (CPA)?

What Is The Best CTA (Call-To-Action)?